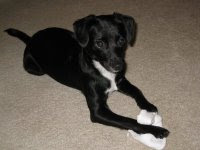 this is branner’s new cousin, buster.

buster lives in north carolina with my cousin lauren and her awesome husband, but i can already tell branner and buster are gonna be buds.

buster’s got that look (and name) that says he’s up for a good wrestling match, which is exactly the kind of attitude that branner digs. branner’s not a calm dog…he’s a dog on crack cocaine.

my sister’s dog, shiloh, is a mellow dog, and he looks at branner like he’s got something wrong with him whenever they see each other.

there’s is definitely something wrong with branner.

which buster will have to see for himself someday when the family’s all in one place!