on saturday night i went to my ten-year highschool reunion, which is the kind of event that seems to get people’s skin crawling until they actually get there and start drinking together.

i organized a bit of a pre-game nearby, so that a group of us could catch up in a shorter-term context because we’d seen one another (albeit infrequently) over the past few years, and so that we could loosen the nerves, so to speak, before walking over to the bar where the event was held.

i’ve always been a very socially outgoing person, as many of you know, so i really had no qualms about the whole “people i haven’t seen in ten years” thing and was looking forward to the randomness of the night. call me crazy…i like parties.

and as people began showing up the name games started and small groups began congregating all over the place playing catch up and filling in blanks. i parked myself with an old friend i’d known since kindergarden, and along with his darling girlfriend we laughed and reminisced and pulled stragglers into our circle to update us.

some people brought old pictures…some of which were posted online after the event: 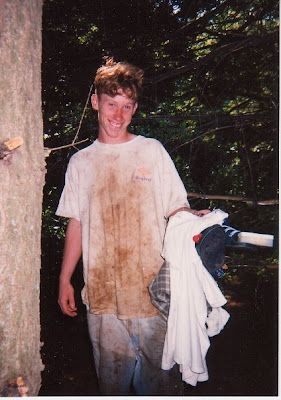 that’s me in ’95, i believe, and that should take care of any blog-crushes that might be out there, yes?

but really…i was really impressed with the event and with the people who i hadn’t thought about in years. not because they’re amazingly successful, which plenty of them are, and not because the nerdy girls got hot and the popularity contest was over (all true as well), but because everyone had a maturity and self-comfort about them.

people were so easy to talk to.

and even as the night wore on, and they extended our drink special for two more hours (i didn’t know that could ever happen), the goofiness increased and the stories got better and you felt good about connecting with your past because it showed you how far you’ve come.